The emergence of Facebook and other new platforms might have seemingly cast some traditional forms of marketing to the side. However, one which is well and truly thriving is email marketing. It might have been around since the beginning of the internet, but it has still busted the results of so many other marketing methods that companies are tapping into.

Whether you are selling a service B2B, or a product like a Rolex watch to consumers, email marketing can always work a charm as long as your email list is in order. With this list, any sort of heist is possible – even for small companies who are seemingly facing a losing battle when they compete against some of the big players in the likes of London, New York and other major cities.

Following on from this, we have asked Michael Briese for his advice on email marketing. This is an individual who knows all about the practice, and the following will take a look at some of his top recommendations for getting the most out of this method.

Hopefully, this is already a technique you are employing.

There’s nothing worse as a user than receiving an email from a company who addresses you as “customer”. Or, if they want to provide you something of a compliment, “valued customer“.

Nowadays, there are absolutely no excuses for following such a path. Companies hold huge databases, which contain both name and email fields. A simple “Dear John” is much friendlier, and ultimately personable.

There have been studies that have shown that a personalized email can result in transaction values being more than six times higher. This, in itself, is enough evidence to us that you simply must be tapping into personalization.

The power of segmentation

One of the “new kids on the block” when it comes to email marketing is segmentation. In simple words, this refers to the practice of dividing up your database into segments, which target people of different backgrounds. How you attempt to segment them is completely up to you. Some companies might base it on age, others on household income, while some might even only look to target customers in a specific neighborhood.

Again, there are umpteen studies out there which confirm that personalization works an absolute treat. It’s something which is able to target your customers with messages which are in effect very personal; and as the first point showed this is crucially important.

Don’t underestimate the power of automation

This next suggestion sounds almost too simple. However, again there is science behind it, with studies showing that open rates for “automatic” emails are significantly higher than the rates for traditional emails.

When we talk about these automatic emails, we’re referring to ones which welcome you to a service, or even thank you for buying something. Bearing this in mind, make sure you squeeze enough incentives for those users who do open these trigger emails – they are much more likely to convert and spend potentially more money with you.

« How Do You Earn Money With DasCoin?
How Big Data Can Help Your Company » 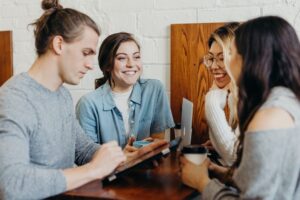